If your dog is out in the yard and sees him or her munching on grass, you may not understand how that is possible. In addition, you may not understand why your dog would want to eat grass since that is not part of their diet. Because dogs have been conditioned to be more like humans, they have become omnivores since they now eat several fruits and vegetables, and grains instead of only meat. Again, however, the grass is not part of the diet for dogs.

What Do Veterinarians Say About Dogs Eating Grass? 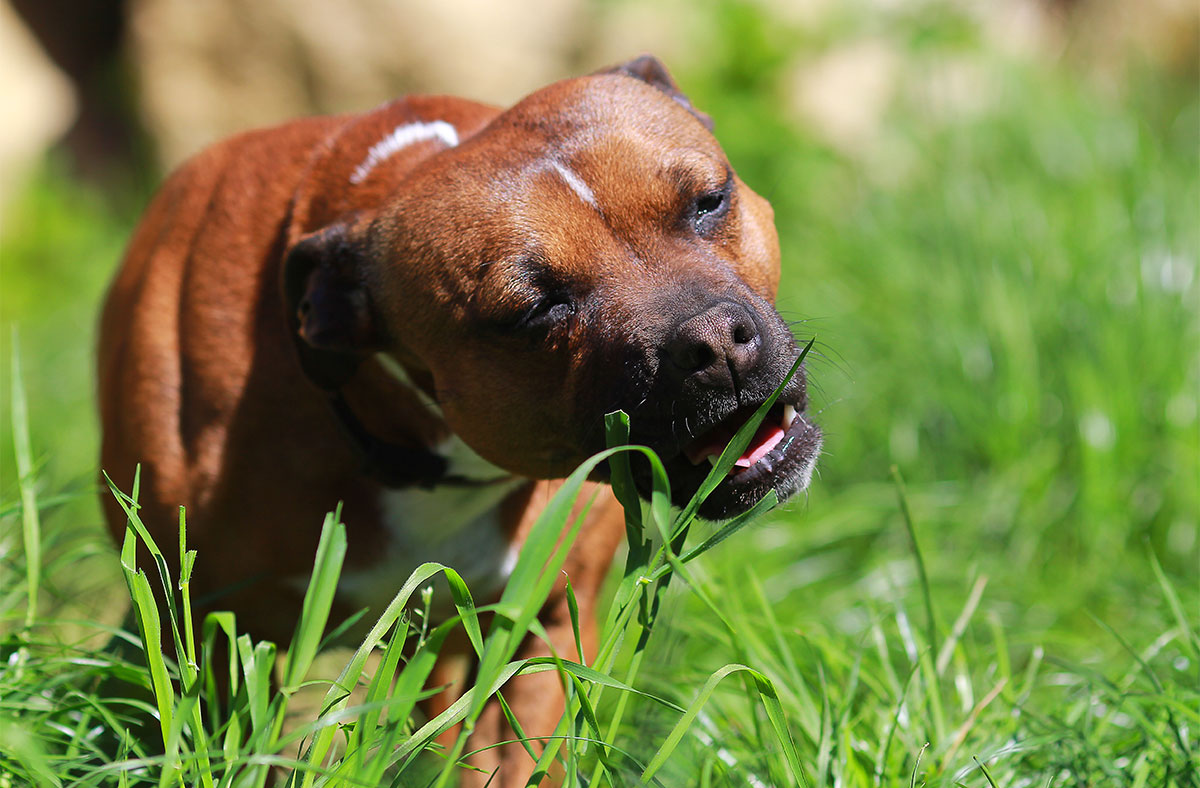 Veterinarians say that dogs eating grass is known as pica, whereas that applies to anyone who eats anything inedible like clay and dirt. It can be a sign that there are nutritional deficiencies, which is why anyone would have pica and eat inedible things, including grass for dogs. However, at the same time, perhaps dogs eating grass is not necessarily pica if they are getting a balanced diet because most dogs are on reputable dog foods that provide the essential nutrients including fiber, so why else would dogs that are nourished well eat grass?

Eating Grass Is A Physical Need

One thought that many owners and veterinarians had when it came to dogs eating grass for reasons that had nothing to do with pica was that it served as an emetic if dogs had an upset stomach. Therefore, they believed if dogs ate grass, it was their way of inducing vomiting if they had an upset stomach. However, at the same time, some veterinarians believed that if dogs did vomit after eating grass, they ate grass out of curiosity that made them sick, and it had nothing to do with the dog feeling ill beforehand. Therefore, for a long time, that was one of the chicken and egg type of situations.

That was before studies were conducted, as they showed that fewer than a quarter of dogs vomits after eating grass. Therefore, it is not at all likely that they eat grass because they are feeling sick. Studies showed that only ten percent of dogs were sick before eating grass. Therefore, the majority of dogs do not eat grass because of being ill and do not become ill afterward.

However, there is another potential reason that is being investigated now, which may be the reason why dogs eat grass. And yes, it has to do with a digestive issue, but nothing to do with illnesses. Dogs that don’t have enough fiber in their diets may turn to grass because it is a great source of fiber even though it offers no other nutrients. If the dog is constipated, then they may eat grass to help fix that issue. Therefore, if the dog has not pooped in days, and is eating grass, then that may fix the issue. Eating grass may be a psychological issue too.

Eating Grass May Also Be A Behavioral And Psychological Issue

If the dog is feeling that they are not getting enough attention from the owners, he or she may end up turning to grass to get attention even if it is negative. They know the owner will scold them and that is what they want in this instance. Also, eating grass may be a comforting thing for dogs the same way it is for people with anxiety to chew their nails. Those issues are being further investigated.

The role of pets is to teach us to love, not to replace love!

View all of buddy's posts.
We use cookies on our website to give you the most relevant experience by remembering your preferences and repeat visits. By clicking “Accept”, you consent to the use of ALL the cookies.
Do not sell my personal information.
Cookie SettingsAccept
Manage consent

This website uses cookies to improve your experience while you navigate through the website. Out of these, the cookies that are categorized as necessary are stored on your browser as they are essential for the working of basic functionalities of the website. We also use third-party cookies that help us analyze and understand how you use this website. These cookies will be stored in your browser only with your consent. You also have the option to opt-out of these cookies. But opting out of some of these cookies may affect your browsing experience.
Necessary Always Enabled
Necessary cookies are absolutely essential for the website to function properly. These cookies ensure basic functionalities and security features of the website, anonymously.
Functional
Functional cookies help to perform certain functionalities like sharing the content of the website on social media platforms, collect feedbacks, and other third-party features.
Performance
Performance cookies are used to understand and analyze the key performance indexes of the website which helps in delivering a better user experience for the visitors.
Analytics
Analytical cookies are used to understand how visitors interact with the website. These cookies help provide information on metrics the number of visitors, bounce rate, traffic source, etc.
Advertisement
Advertisement cookies are used to provide visitors with relevant ads and marketing campaigns. These cookies track visitors across websites and collect information to provide customized ads.
Others
Other uncategorized cookies are those that are being analyzed and have not been classified into a category as yet.
SAVE & ACCEPT